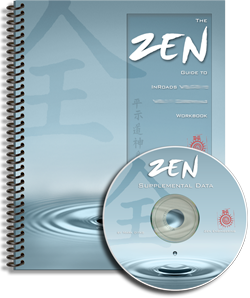 June 2009 - InRoads V8i Workbook is released. In December 2008, the next version of InRoads, V8.11, or V8i was released by Bentley. This version didn't change the InRoads software very much; however it will only run on MicroStation V8i. The material of this book walks the reader through a sample roadway project. Each step of the project and its relationship with the InRoads software is detailed with explanation and hands-on.

V8i Addendum - When you upgrade your software to InRoads V8i, SS1,SS1R or SS2; simply purchase the V8i Workbook and we will include the addendum if you are using either SS1, SS1R or SS2. Just be sure to know the version number of InRoads you are using before you click "Buy Now".  To see how to find your version number.   Click Here

This addendum is meant to accompany The Zen Guide to InRoads V8i V.11 Essentials Workbook. Bentley has released some new versions of the software that include minor changes to the way InRoads V8i software interface looks and functions. These new releases, SS1, SS1R and SS2, are still considered to be under the V8i umbrella and therefore we here at Zen felt it was best to just issue an Addendum so not to complicate the issue of determining which training workbook you need.

Great Instructor. Thoroughly explained everything and so clearly. Used good examples when explaining concepts. Enjoyed it, learned a lot.